The Preamble to Any Constitution

Constitutions are made for a reason. The Preamble relays the reason. All Constitutions in the West aim for an Ideal Government for the specific people it will cover. The ancient philosophy of Greeks and Romans underlie all Western Constitutions. 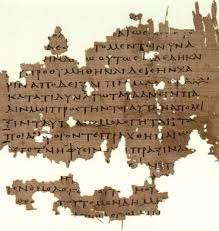 Plato’s Republic is probably the first work on forms of government and Constitutions.

One would think that from it, one would get a pretty good definition of a “Republic.”

The name Plato gave the work was NOT “republic” but “politeia” (pole-eye-tay-ya) which is “the relation between citizen and state” or The Ideal State.

Funny that later readers took the “ideal state” to be a republic.

Much of the Republic of Plato explores “what is justice?” Certainly, we can use justice to measure how Ideal a government is.

He goes on that the best rulers will be philosophers, philosopher-kings. They, in searching for the good and true, will be able to dispense justice. That means his ideal state – this is very important – is run by an elite minority.  That is, the minority deemed best to rule.

That is an Aristocracy and he calls it so.  It is not a “republic.” It is an aristocracy. Of course, Plato, a philosopher, would think the philosophers should rule. We could do worse.

And the Republic of Plato is about to take us on that journey.

The Aristocracy of the philosopher-kings is the ideal. Then in Book 8, Plato lays out what he sees as the four other forms of government.

The honorable corrupt into the wealthy and an “Oligarchy” ensues.

The oligarchs lend to the poor who become oppressed and revolt, ushering in a “Democracy.” It all reads pretty Marxist.

The democracy cannot sustain itself because, just as the oligarch was greedy for money, the democratic person is greedy for freedom. Liberty becomes libertine and the people demand something be done about it. Thus comes about the final form of government, Tyranny.

Nowhere does he describe a Republic.

Aristotle, his student, was a more thorough observer and came up with  more advanced scheme than the Republic of Plato. 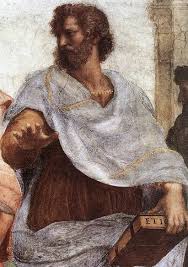 Aristotle was Plato's prize student. I mean, literally, Aristotle as a young man sat at the feet of an elder Plato.  Plato’s IDEAL government was based on a philosopher's hope of the way things should be. It served as a preamble for Aristotle's new way of looking at the world.

Aristotle, rather than thinking about how thing should be, looked at things to see how they actually are.

Aristotle did not see an aristocracy of philosopher kings anywhere. He did see Oligarchy and Tyrannies and other forms. His book “Politika” means “things concerning the ‘polis’ (city or community)”. We call it the Politics.

In Book 4 of the Politics, Aristotle observes that any government, that is to say, those who make and enforce the rules, either do it to benefit (1) the Common Good or (2) for their own selfish interest.

Further, those who make the rules are either (A) A single Person, (B) A minority of the people, or (C) the many ... Six Forms of Government. 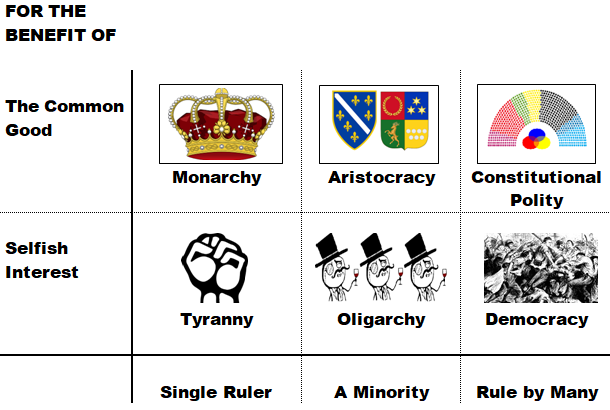 Our interest is in what Aristotle called the “so-called polity or constitutional government” (upper-right corner in diagram). It is just about what we would call a “republic” toady.

Polity has a number of meanings but the one that applies is “an organized society”. It is constituted by a number of parts. It is a mix-and-match of a single ruler, different minorities or “interests”, even large “minorities.” Some polities tend toward aristocracy, some toward democracy, and so on. Every one of them has a “constitution” describing how the pieces fit together.

This is the first mention I know of a "Constitutional Government".

About 100 year after Aristotle died, Polybius was educated in the best Greek tradition, fought the Romans as they conquered Greece and was taken prisoner. His education admitted him to the best Roman families. He was able to closely observe the Roman Republic. 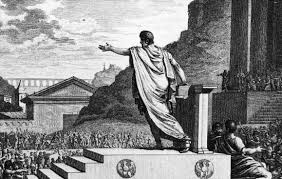 Rome started as warring tribes. Rather than destroy each other, they joined together and decided to be ruled by a king. The monarch was a "thing of the tribes."  The tribes created the king. He was there creation.

The monarchy lasted about 200 years before it became so corrupt the People had to replace it. They called the new government Res Publica ("thing of the People").

It was what Aristotle would have called a "so-called polity or constitutional government."

Res Publica could be called the preamble of every republic since. The Roman Republic demonstrated that a "constitutional polity" could last longer than other forms of government. It covered a 500 year span from 509 BC to 27 BC, and was the fasted growing, longest-lasting series of conquests and held territory known to that time. It held much longer a much larger territory than the Hittites, Babylonians, Medes, Persians, or Egyptians.

Roman domination would only be surpassed with the opening of the Western Hemisphere by European kingdoms 1000 years later.

A Republic is designed for stability and prosperity.

The term "republic" has become confused over the last 200 years or so. It has become so muddled, I even had a sitting United States Senator tell me a republic is "a type of, a subset of, democracy."

Our Constitution defines a "so-called polity," what we commonly call a "republic." Anyone who want to understand our Constitution must be able to define republic. A good basic definition is What is a Republic? The Concise Definition you were Never Taught

Grab it on Amazon

Slavery and the Constitution